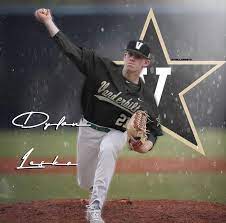 Lesko is polished and has the chance for a true 4 pitch mix. The fastball and changeup will carry the profile but the growth of Lesko's breakers will determine his draft position. With quality strikes and the pitchability to match, Lesko is likely to be drafted early enough to forgo his Vanderbilt commitment.

Dylan Lesko has long been regarded as the top pitcher in the prep class and this year was named Gatorade National Player of the Year—an exceptionally rare honor for a junior. He has three pitches with plus potential—a mid-90s fastball, a breaking ball with a high spin rate and a changeup that may be his best pitch right now. He checks just about every box for a high school righthander and has frontline starter upside.

Everything comes awfully easy to Lesko on the mound. He’s considered one of the more polished arms in the class featuring an easy, fluid delivery with a four-pitch mix. Lesko’s mechanics are simple and repeatable. It’s effortless velocity without the violence or headwhack that can derail a young pitcher’s career down the road. Lesko really gets into his lower half and shows exquisite efficiency down the bump. It’s a high three-quarters delivery. The heater has been up to 99, but more comfortably sits 93-96 most nights. Changeup is his best secondary, thrown with plenty of intent featuring fading action into the back foot ofmrighties and darting away from lefties. He has a slider and a curveball, both of which flash plus with big spin rates and advanced command. He has very good command of all four pitches and is more than willing to sequence backwards. Some believe Lesko represents the best prep pitching prospect the MLB Draft has seen since Hunter Greene or MacKenzie Gore.

What HS pitchers throw the most strikes *and* induce the most swing and miss?

Collected as much data from tools and film study as possible. Every showcase. Every player has at least 10 batters faced this summer. Most are 40 batters or more though.

Lesko has a good feel for the strike zone and paints it with three main pitches: a fastball that stays in the upper-90s, a sweeping slider that’s his finishing pitch and a sneaky changeup that’s also become a go-to finisher. The only downside about Lesko is that he’s committed to Vanderbilt, so that means if he drops in the draft, he’ll most likely not sign and try to win a title with Vandy, all while improving his draft stock.

The Pittsburgh Pirates and Ben Cherington still have a ways to go in their rebuild, but they’ve infused a massive amount of talent into their system in the last twelve months and are certainly on their way back. The system is still starved of high-upside pitching, and that’s certainly what you’re buying in Lesko.

Polish, polish, polish. This kid is about as advanced a high school arm as you’ll ever find. The operation and mechanics are smooth and fluid. He really looks the part. The fastball has been up to 97. There’s two distinct breaking balls here and a changeup the he uses to fool lefty bats. Lesko has exceptional command for a prep arm and has the look of a potential future no. 1.

A future rotation consisting of Lesko, Roansy Contreras, Quinn Priester, Anthony Solometo and Bubba Chandler is enough to get anyone excited.

Right now, Lesko is the best prep arm in the 2022 MLB draft class. He is 6-foot-3, 195 pounds who throws a mid-90s fastball from an athletic and repeatable delivery. The righty has consistently performed well on the showcase circuit and has all the tools to be a high-end starter in pro ball.

I’m notoriously afraid of selecting prep arms early. If Lesko is still on the board when the Cubs are selecting, he’d be really tempting. He’s already throwing in the high 90s with a reasonably tame delivery. At 6’3” ,170, his best secondary pitch, so far, is a change-up. Sounds like what the Cubs might lean toward.

The first pitcher came off the board when Mayo took Dylan Lesko at No. 4. The 6-foot-3 Vanderbilt commit already possesses a mid-90s fastball, a plus changeup and a quality breaking ball.

Lesko entered the summer as the perceived top prep arm in this class and he confirmed it at various stops. He’s 6-foot-3, athletic and has a very good feel for three pitches, with his mid-90s fastball and his plus changeup the standouts, though he definitely knows how to spin a breaking ball, too

Jackson Jobe was/is a very unique case that isn't comparable to Dylan Lesko. The latter has been the consensus best pitcher in the class for several years now, has more polish and refinement and maybe higher floor, whereas the former is a late-blooming freak

A look a the arsenal of Dylan Lesko of Buford High School (2022) w/ a little Pitching Ninja type overlay.Lesko is the top ranked pitcher in the country and a Vandy boys commit. FB worked mostly 95/6 Touching 97, CB 78, CH 80-83

Seen a lot of “oh man, Lesko is really good, might be a top 10 pick” recently…welcome to each of the last 4 years. Been a dude for a long time. PGAAC was just the latest entry in the dude diary.

Dylan Lesko is in the conversation for top high school pitcher in the class. He’s a good sized and projectable right hander who has touched 97 MPH with more in the tank to go with an excellent change and slider as part of a deep arsenal of pitches. Lesko isn’t just a velocity guy, but a kid who understands how to pitch. If it wasn’t for the fact high school right handers don’t go No. 1, Lesko could be in that conversation for the top pick overall as well.

Lesko throws a high-spin breaking ball in the 78-81 mph range, which has recorded spin rates in the 2700-3000 rpm range this summer. The pitch has three-quarter shape and plenty of depth and hard finish, but he has spiked the pitch and buried it out of the zone at times.

His changeup is his most consistent offering and potentially his best current pitch, in addition to arguably the best changeup in the entire class.

Popular posts from this blog 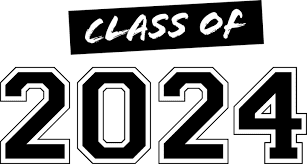 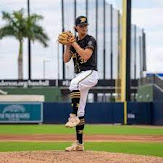 This morning, we are speaking with David Lally , a very talented righty out of Grand Blanc (Mich.) High School.   The big guy (6-4, 220) has flashed a 92-94 fastball, but it is his slurvy breaker that seems to be his go to pitch. We’ll see what he thinks.   Mack - First, morning David. Let’s start off by telling us how you have gotten to this point so far in your baseball career? When did you start playing and when did you realize that you wanted to make a career out of this?   David - Hello sir, Glad that you could get these questions to me and I am thankful that you have reached out to me and wrote a few things about me.   In order to have gotten to this point in my baseball career, I have put in countless amounts of hours of work, whether it be on the diamond, in the weight room, in the classroom, etc. I know that I would have never gotten to this point in my career if it weren't for my dad, David Lally Sr. , who has continuously pushed me and always told me that I have somethin
Read more

The MLB draft prospect posts have moved to: https://mlbdraftdatabase.blogspot.com/